Jay-Z Responds To Lil Wayne: Beefing Is A "Sport" In Rap Music 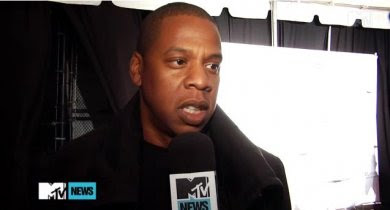 Jay-Z isn't letting any rap "beef" bother him, because it's all a part of the sport in rap music.
MTV news caught up with Jay-Z during his Shawn Carter Scholarship Foundation carnival in NYC this past Thursday.
When asked about his "beef" with Young Money leader Lil Wayne, he said "That's sport, that's rap music. Nothing is going to change, the only thing that changes is the participants."
The lyrics that started all the beef was from Jay-Z and Kanye West's Watch The Throne banger "H.A.M."
Jay-Z rapped, "I'm like really half a billi/n*gga really you got baby money/keep it real with n*ggas/ n*gga you ain't got my lady money.
Lil Wayne fired back on his Tha Carter IV track "It's Good" with, "Talkin' bout baby money/I got your baby money/kidnap your b*tch, get that "how-much-you-love-your-lady" money."
During the time of the MTV VMAs, Jay-Z hopped on J.Cole's track "Mr. Nice Watch" and fired off a warning shot to Lil Wayne, just to let him know he doesn't really want war.
We're glad Jay-Z doesn't take rap beef too seriously, but we can probably expect him to make a few more disses for Weezy in the future.
Check out the video below

Both CD's are bogus...and I was so excited for the to be released! I was sooo disappointed that I gave them away :(

I agree with them ^^

watch the throne was great.

I felt like watch the throne was soooo hyped up that it turned out to be straight garbage. The Carter IV worth the wait and if I got to be the one to say it J. Cole album the nicest shit out right now til Drizzy drops.

Watch The Throne, The Carter IV and J.Cole all are just ok. I am feeling Casey Veggies & Big K.R.I.T right now..

Both watch the throne and the Carter 4 were half added, lil Wayne will never have an album be more successful then the Carter 3. J Cole has the hottest album out right now. But drizzy having the hottest album when it drops later this month is only because no one else worth while is coming out....

Wth was disappointing and I haven't heard the carter 4 but sideline story is dope!

Watch the Throne is fabulous and I wasn't even a fan of neither Jay, nor Kanye before this one. It took a minute for me to get into it though. It's a loud ass CD, it just bangs!!!!! 'Lil Wayne? He went too far, talking about kidnapping the Man's wife. ...uhhhh, that's some silly shit.....AND his CD is garbage! Lbvfs....Carter III was far better than this mess....

All u mutherf**kers needs to shut the f**k up don't know anything about classic albums nor rap and that's real rap....